"Never delay kissing a pretty girl or opening a bottle of whiskey." - Hemingway

“You will be able to open more bottles of Whiskey over time when you invest in Gold now, but not so sure how Gold will help with the kissing a pretty girl part.” - CelticGold

When we discussed this idea enjoying good Jameson Whiskey, all we had in mind was to produce a chart that compares Whiskey in USD to Whiskey in Gold. We just wanted to see what the differences were for Whiskey in Gold vs USD on a historical timeline.

After starting to research Whiskey prices it turned out, it is impossible to get straight numbers on historical Whiskey prices. There was a lot of adjustments and calculation that needed to be done, to get the price of one “bottle”. The charts below will show the price of one bottle, rounded to 750ml -  almost a “fifth”, speaking in US terms. 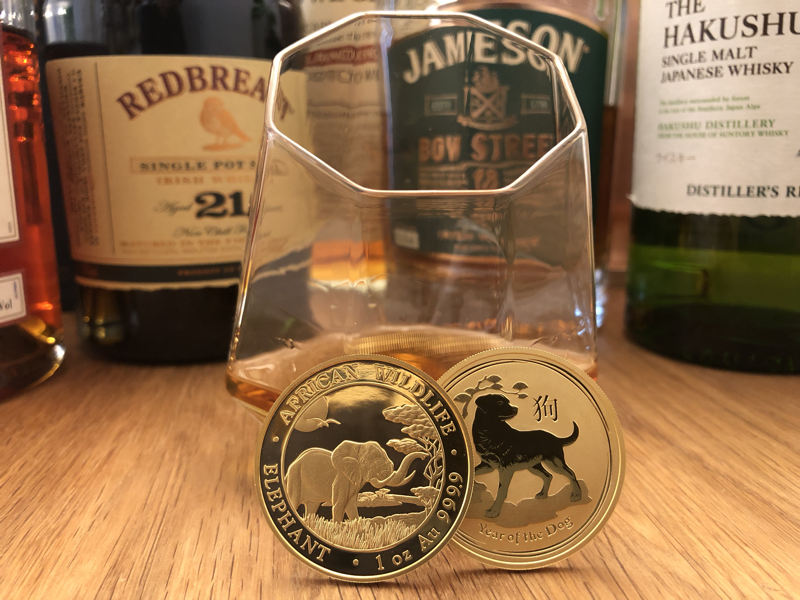 You will find all data sources and explanation at the end of the article. It was challenging to get all the data into one comparable measurement but in result it’s absolute snoredom to read through the raw data and calculation. I’m sure the data freaks will find it interesting, but let’s continue with the results now. 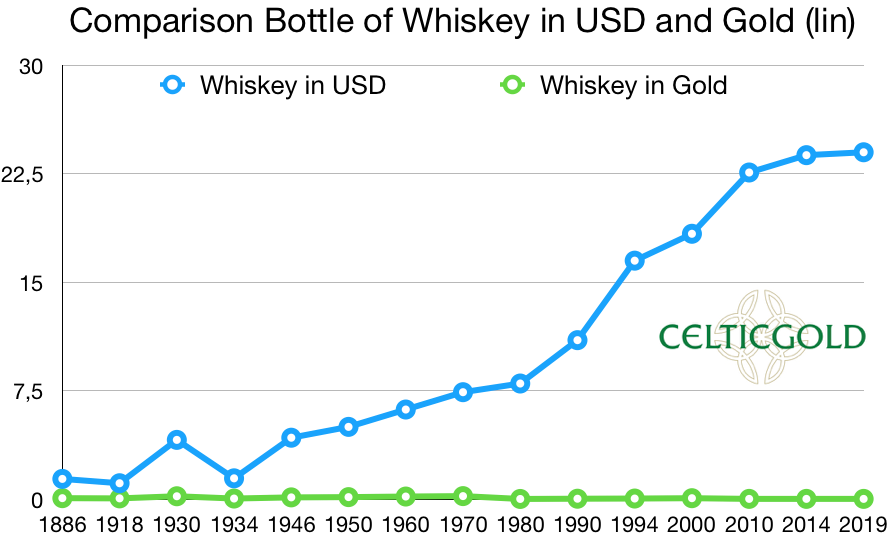 The above chart shows Whiskey prices (750ml bottle) from 1886 to 2019 in a linear version of the same data material as the chart below. We can see Whiskey in USD is continuously rising, whereas Whiskey in Gold is more or less flat. But this is only half of the picture, the next chart will show the finer points in much more detail, because it’s displayed in a logarithmic scale. 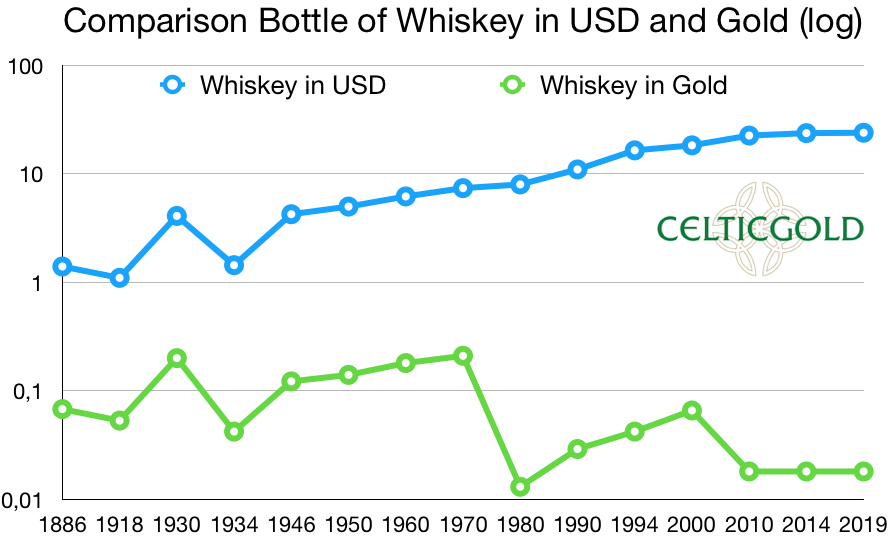 The logarithmic scale shows the valuations in a better way. As you can see, Whiskey in USD is continuously rising. Whiskey measured in Gold, shows very good ratios even in today’s Gold sideways movement. The numbers state, Whiskey has never been cheaper than today, with exception of 1980, where gold peaked due to the end of the US-Dollar Gold standard in 1971.

The conclusion is that gold maintains its purchasing power much better than (any) fiat currency. This is true in many, many cases, especially in the case of Whiskey. Good news for all Whiskey Lovers, especially if you have gold in your portfolio. If you are investing in Whiskeys for the long-term, you need to very carefully select the winners.

Another important aspect is “affordability”. Affordability actually shows in both values (USD and Gold) that booze has never been more affordable than today. You needed 0.07 Oz of Gold or $1.40 for a bottle of Whiskey in 1886. Today it is “only” $24 or 0.018 oz of Gold.

Store some semi-numismatic Gold Coins aside for future Whiskey purchases. The semi-numismatics will most likely appreciate higher than the gold price, which might just get you that extra special 30-Year-Old-Beautiful-Cask-Strength Single Malt you fell in love but your wife told you: “It’s too expensive, darling”. 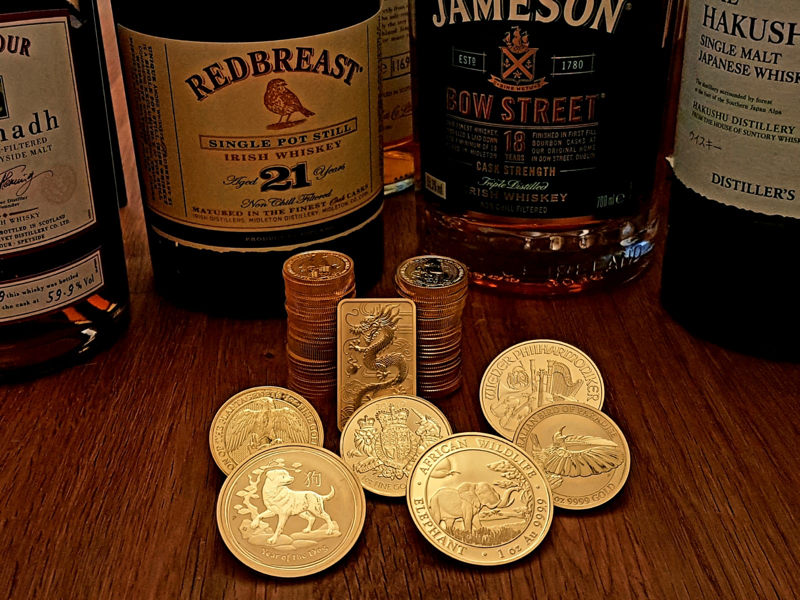 Numbers and Research Material (All links at bottom)

There was a lot of research needed to get numbers for the above article. For example, units of measurement are different, especially for us Europeans and what is classified as “decent” whiskey, or what is a “bottle” and so on. I had to get USD numbers so we could measure the data in one currency and then compare this USD data to Gold.

The above charts were created using historical data, but what we don’t know is how accurate the historics numbers are. Also there were lots of price differences between U.S. states and also brands. For example, imported Whiskey was more expensive than domestic ones. Bottles up until 1930s were aged around 3 years to be considered “decent” Whiskey. Nowadays the Jameson bottle bought at the supermarket is aged for 4 years. The numbers in the chart do not reflect old aged single malts, trading at a collector’s value.

Whiskey was measured in “quart” up until 1930ish and then “fifth” from 1930s onwards. A “fifth” translates to 757ml, which later became the 750ml bottle that we’re familiar with today. Most Whiskey bottles today contain 700ml, so this needed to be calculated as well.

Doing more research on bottle prices in the 1950 to 1980s, it turned out there’s no proper data available. But there was in a case study of U.S. Alcohol Affordability and Real Tax Rates from 1950 to 2011.

Luckily, in 1994 the U.S. Bureau of Labor Statistics started to record prices for “Whiskey at home”, it’s a specialized consumer price index. Yes, there’s an actual CPI for Whiskey. So the data in the chart from 1994 to 2019 is derived from the Whiskey CPI data.

Please see here links with the raw data for the above research: